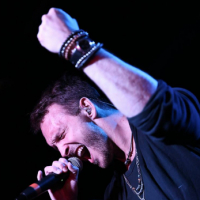 I just got the Pro Plus pack of KTVA and am looking forward to getting started!

About my history & background: I was never a really "naturally" talented singer, having virtually no natural pitch which prevented me from attempting to sing for a long time. After being a fan of hard rock and all kinds of metal for many years and loving those powerful tenor voices, though, I really still wanted to give it a go, and joined my first "real" band some 15 years ago, when I was 19-20 years old after dabbling in a "school band" with some friends for some years prior, notably more focused on guitar though than singing at that time. Needless to say, the first results of me singing were pretty abysmal

But over time vocals improved, pitch got a bit better (I am in the tenor range myself), and I made some progress also with taking some coaching classes every now and then, but never over a really extended period of time and never with the feeling of really making much progress. I'm sure the classes helped in some respect still, but none of my coaches really convinced me to stay on longer than a few months in the end.

Over the years of singing the pretty challenging rock & metal stuff with lack of proper technique and straining too much, I also developed nodules back in 2012 and actually had vocal chord surgery that same year. Thankfully all went well and my voice is now the same as it was before those issues. Since then I've been definitely taking more care of my voice, but I feel I am still lacking a lot of technique and "basic knowledge" of how to actually make the most of my singing while also still having a lot of pitch issues, despite actually enjoying some success with my bands over the past ten years (I've so far released 3 albums + 1 EP with one band where I am also one of the main songwriters and lyricist and another album, EP and just some weeks ago a live album with another band).

The past five years were pretty stressful for me between a fulltime day job and two bands, especially since one of them was making a pretty decent comeback with resulted in an increased touring schedule. Since I couldn't keep up with that schedule anymore without changing my job (which I also like, and of course it pays the bills more so than singing ^^), I quit that band at the end of last year to focus on "just" one job and one band.

I now want to use that additional free time to try and go back to actual vocal training and improving my overall singing technique & pitch, in order to be able to turn everything up a notch or two when it's time for the next album recordings, most likely in the beginning of 2020. So let's see how that works out with some help from KTVA