mixing rock vocals to make them sound big and present 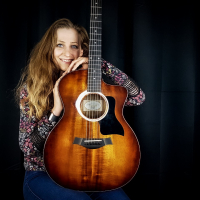 I am pretty new to KTVA so I am very happy to get to know you and have some interesting conversations. I am having some troubles mixing my vocals and having them "present" in the song. Maybe you can help me

So I recorded my vocals three times and panned two versions. That normally gets the job done but unfortunately not this time.
I recorded again (this time only once) and tried to mix it a little differently which did not make me happy again

Maybe you have some ideas what I could try to do to make them sound really fat and present in the mix.
By the way its a rock song with some loud vocals in it.
I am using a Rode NT1 microphone, Scarlett 2i2 interface and Cubase (with compressor, EQ, maximizer... from Cubase).

I thought i might try to record my vocals again without using the pop filter and maybe increase the distance to the microphone?
Also what would you say is the best distance from the microphone when changing from quiet to loud vocals?

Thanks already for your ideas!