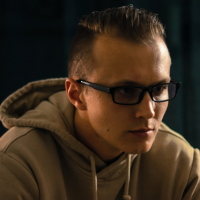 Jake_Stone 2.0 PRO Posts: 8
August 4 edited August 4 in INTRODUCE YOURSELF
I'm new here and figured I would introduce myself. My name is Jake Stone, I live in Gilbert AZ and I've been doing Ken Tamplin's course seriously since about April of this year. I started doing vocals in 2015 and had to take two years off while I served as a missionary for The Church of Jesus Christ of Latter-Day Saints and then didn't really pick vocals back up until this year. I do primarily rock and metal vocals, clean singing, aggressive singing, and screams. I cut way back on hours at work and currently practice 4-5 hours a day most days of the week with 1-2 days of rest depending on what feels needed. When I started doing vocals I would practice every night in my parents car without it turned on just so nobody would hear me, even during the summers. Let's just say it got super hot in there and I'd sweat like crazy but I didn't care because I "wanted it." I won't lie, I have some pretty lofty goals as a musician and vocalist, I want to be able to tour, be an absolute monster on stage and in the studio. I want to be undeniably good and be able to do it full time. So far Ken is the only coach I've seen who can demonstrate that he knows what he's talking about and that his techniques work. I joined to try and improve my singing stamina and technique as well as undo some potential bad habits I had developed by being completely self taught, so here I am. I hope to get to know some of you and hear some of your killer vocals in the future