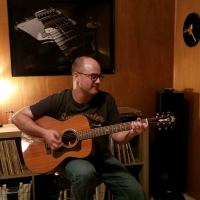 jasondotj Pro, 2.0 PRO Posts: 51
October 2017 in Ken Tamplin Vocal Academy REVIEWS
I just have to say I regret not starting this several years ago...or at least earlier this year when I first found out about KTVA when researching online singing programs.

I have been focusing on control, vowel modifications, breath support, and I have been recording and analyzing myself. I have also posted a few scales on the forum for some feedback, and have received some great information. I have worked 5 - 6 days per week on the Volume 1 exercises. I have been trying to avoid singing in the car or playing my acoustic guitar and singing some of my favorite cover songs. Until last night I pulled out my guitar and sang some of the songs I enjoy. WOW! What a difference even two weeks can make! I can't wait to see how my voice will grow in the next two months! The next two years even!

One of my biggest issues I would have besides control is bridging. I would just avoid it, and jump in to the higher notes which placed straining on my throat. Well, I recorded myself last night singing a song I would struggle with months ago, and it sounded better... LOTS better. It's still not good enough to put up yet, but it is definitely improved by a mile. And it involves some bridging to get to the higher notes on the chorus. I believe I have already stretched my chest to where I don't need to start my first vowel modification until Bb3. It used to be around Ab3 so I've already stretched it one full step (I'm a guitar player so if that's not the correct term, forgive me) in just two weeks! I am now able to sing the higher notes after incorporating the modifications (I used to not be able to pass D4 in the exercises even though I used to "jump" into higher notes in head voice, even though they didn't sound that good).

Anyway, last night I did the vocal exercises and then pulled out my acoustic. The first several songs sounded so much better. And, I couldn't tell if I was just singing too loud (as I tend to oversing) or I just had better resonance. Well, it definitely did not place as much strain on my throat. I sang for about an hour and a half with my guitar and started noticing some fatigue, but not really any strain. I had to finally quit, but I don't feel sore this morning or anything, so that's good. The last few songs started to suffer as I feel as though I was falling into some old habits and plus I was getting tired. I still feel as though I have a lot to work through on Level 1 and will continue until I am sure I'm ready to move on to Level 2. But, yes, this program is AMAZING! I have learned more in two weeks than I've learned my entire lifetime trying to be "self-taught" and a couple months of singing lessons years ago. I guess I thought since I was mostly self taught on the guitar, I thought eventually I would be able to "pick up" singing. Uh, no. The voice is a complicated instrument, but it can be learned. Ken Tamplin teaches it in a way that makes sense. I'm excited about my growth in this program! Again, I can't wait to see how I sound this time next year! I regret not starting this years ago, but there's no time like the present, right!?!?!