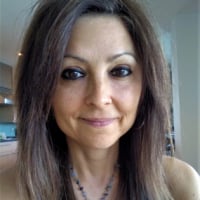 Ever since I was a little girl, I wanted desperately to sing. But I was so bad at singing that even my 7th grade Chorus teacher wouldn't let me sing in the chorus. After college, I did some part-time DJ gigs that included assisting with a Karoake night. This required me to sing, so I picked easy songs (like...Captain & Tennille's remake of Shop Around!) and eventually became comfortable with this.

That gave me the guts to sing some back-up in my friend's garage band, and they quickly popped me to the front to sing some rock songs. I wasn't very good, but it was rock, I was a girl, and the outfits were cute, so no one seemed to care that I couldn't sing very well. I had no power, no vibrato, and was on pitch only about 90% of the time.

I eventually ended up singing with a hard-rock band for a couple of years. A few years after that band broke up I ventured into singing with an acoustic guitar player. It's hard to hide your voice with just an acoustic player, so I had to choose songs carefully and hope that nobody noticed how powerless and slightly off-tune my voice was. Somehow, we got gigs and I did that for about a year until my "career" took me away from the fun stuff. That experience was a good one for me, but it didn't put me on the map vocally.

Then I stopped singing. No Karaoke, no band, nothing acoustic. I figured I was awful anyway, so what was the point of trying to get back into it? So, I sang in my car, and the shower, and left it at that. But every time I saw a video clip of an old band I loved, or some YouTube singer (a good one), my eyes would well up with tears and I would think about that lost dream. I would watch other people singing and living their dreams, but I felt that I could never be like them.

As a side note, I *did* hire a few vocal coaches over the years, but they weren't very good. A couple of years ago, one of those nights that I was watching videos I stumbled upon an instructor online who claimed that he could help anyone find their vibrato. I ended up contacting one of his local instructors, and she actually *did* help. I became slightly hopeful! But then my work got in the way again, and I had to stop with the lessons. Plus, I had nowhere to sing anyway.

About a year ago I stumbled onto Ken's videos and was super inspired by them, but I had given up on my dream, so I didn't act on taking lessons. Again the sadness, but I just stuffed it down.

Last Friday night, I went (as a last minute decision) to see a concert. Something inside of me just won't let the rock-n-roll dream die. I cried on the way to the concert venue because it just felt so right to be with music. It was Tesla, Styx, and Joan Jett. I really went to see Tesla, but Styx was INCREDIBLE, and Joan Jett was pretty good too. I was SO inspired by singing along w/Tesla and Styx that I came home and looked for Ken again. I also called my old guitar player (from the rock band of YEARS ago), and said...Tim, I want to sing. Let's play. He was excited. He contacted his bass player and drummer. Their old female singer had to quit singing with them, so they have not been playing. NOW...the play list. OMG--- Ronnie James Dio...Rush...Judas Priest.. all of that stuff I used to sing. So, our first practice is coming in about a week, and I'm cramming to tune up my voice. Ken's videos have already helped, but I REALLY REALLY have a long journey. I just hope these guys will be forgiving while I get my voice to where it needs to be. I'll do everything I can to be my best. I also still want to sing the beautiful songs, so I'm going to look for an outlet for that too.