Just 1 week of KTVA lessons! Cover/Karaoke Stevie Nicks - For What it's Worth 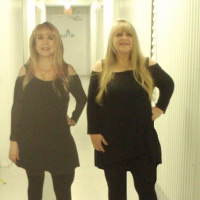 BarbieLynn 2.0 PRO Posts: 56
September 2019 in Newbies Demo Area - for those who want to test the waters!
Okay.. I've been told I sound a lot like Stevie Nicks, and I couldn't find a karaoke version of this song, so I sang along with it. I have since found a somewhat suitable way of removing vocals from the original, so I'll post that version later on. This is for voice comparison. Hopefully you can hear both voices here and there, enough to make an evaluation. For fun, instead of forcing you to watch me sing the whole time, I slipped in some random videos and pics of my own. Three out of four kitties.. Caroline, Hemingway and FatBoy make a cameo appearance. The photographer is taking a shot of me standing next to a lifesized cardboard cutout of Miss Nicks, used in a local newspaper article about how I look and sound like her. The Hawaiian word 'Aumakua (ah oo mah koo ah) means "totem animal" or animal one feels closely bonded to. And finally, the critter at the very end is a creation of mine when I was studying the art of animation in 2007.
This, by the way, is after only 1 week of studying/practicing at KTVA!
As they say.... Here goes nuthin' ...