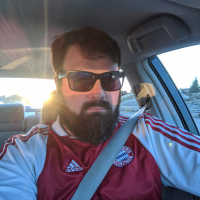 everardofilho 2.0 PRO Posts: 3
October 2019 in INTRODUCE YOURSELF
Hello,
My name is Everardo, and I'm Brazilian living in the US.
I just joined Ken Tamplin Vocal Academy after following the youtube channel for a while.
I'm a drummer, and I've been playing drums since 2001, but I always felt that I could be a singer as well. Why? I have no idea.. my voice sucks.. at least for now.

Three months ago, I hired the singer of a band that I like a lot to be my vocal teacher, but I noticed that it's not working for me because of scheduling conflicts.

The time I have to practice is during my commute since I spent over 2h a day stuck in traffic. Do you guys think it's doable?