Hi from A Land Down Under 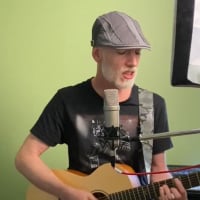 I have been reading over the forums for a while and figure it is time to introduce myself.
My name is Scotty (aka codeowl), I am a computer programmer by trade, hence the handle.
I bought the course mid March 2019. I have always wanted to learn how to sing correctly, and in my youth, (am 49 now), I did write a few songs and sing them with some mates, (I play guitar), this was mainly because I really enjoyed singing, and cause we didn’t have a singer and no one else would do it, not because I could sing well, I couldn’t :-). Plus because I wrote the songs the melody was like two notes… :-)
I have always struggled with pitch, and being able to articulate a melody. Like I can sing along with stuff on the radio, and I could try and match the tone, and pitch of the singer and it didn't sound to me to be way off, but if I try and sing without the singer's melody to follow I was lost. I struggled to tell the difference between hitting the note, or hitting a note that harmonizes with the note you are trying to hit. So when the singer wasn't there for the notes I was getting wrong to harmonize with, it sounded like I was all over the place, hitting wrong notes every other time... on account of, I was :-) I was much more comfortable just singing the root notes of chords, but if the melody used other notes from the chord I couldn't pick them.

First Attempt with the Course:
I did volume one for about 6 months. When I first started I had to do the notes on my keyboard slowly as I had so much trouble actually hitting the correct note and the scales provided were too fast for me to be accurate. As time went on I would have nights where I could suddenly do stuff I was not able to do like hit a note easily, I was so excited, but then the next day I couldn’t do it again, or after a week I lost it, and after a while of singing 6 nights a week I got to the point where my voice would burn out. I would get very croaky, and sometimes to the point of being hoarse.

Some big influences of mine growing up were AC/DC and Cold Chisel, (I am an Aussie), and they both belt, and so over the years I have tried to emulate this with no technique other than push hard…. I have always sung in the car, or after work for countless hours to my fav songs over the years, (this is before buying a course and trying to use correct technique), and it was all pushing.

When I watched Kens vid on diaphragmatic breathing I saw him breathe in with his tummy and then push it out really quick to illustrate breathing from the diaphragm, (I now understand that this in itself is not support, it is just diaphragmatic breathing)… but this sort of reinforced my faulty notion of pushing, and that support was using your diaphragm … to push the air out… A big oversight on my part, and I had not really spent much time in the forums to learn that I had interpreted this wrong. After 6 months with the course it was like every other day my voice would burn out… I would take a few days off and then try again, and by the third day it would be toast again.
This was pretty discouraging and then I got really busy with deadlines at work and just left the coarse there.


Second Attempt with the Course:
I had four weeks off over Christmas and leading up to this I had done some singing along to some tunes I liked that came on the radio and had some little breakthroughs that made singing a lot easier. This time I made sure that I worked out the mechanics of what I did to achieve this. So I worked out it was lifting my soft palate that made the difference. I did some research on this, and experimented with how to achieve this on command and worked out that the mechanics of yawning does this, and then practiced how to do this by just engaging those muscles without actually yawning. This was a total game changer. I had four weeks off lined up and I thought to myself I am going to re-orientate my life around learning how to sing with correct technique and reaching my potential, whatever that may be. I worked out that there is another area I could lift, I don’t really know how to explain it, but I worked out the mechanics of it can be replicated if you make a face like you're going to sneeze. It raises an area that feels like it is just under the bridge of your nose. Focus on this while you raise your eyebrows and show some teeth like you do when you are about to sneeze, and you will feel the muscles engage. This made higher notes way easier… it was amazing… It was like before these soft palate breakthroughs, I was doing everything with my throat, and this got my voice out of my throat and allowed me to move up in pitch with ease, without constricting my throat to push the pitch up.
I went great guns over the four weeks off doing the workouts 6 nights a week. We have a bass player and drummer at work and we had been jamming a bit at the end of 2019, (we all worked from home for most of 2020), so i was keen to do some singing with them. I did the vocal workouts in the car before the jam and couldn’t get through them without getting really croaky…

I remembered Ken saying that you lose 30% of your support when sitting. So I decided I didn’t have a good understanding of support. This time I got on the forum here and did several nights of research and learnt that support is actually pushing down to prevent your body's natural tendency to push out air that you breathe in, with the end goal of being able to control the amount/force of air passing over your cords. I really appreciated the level of detail that people went into in the forum. It is just brilliant to have it explained from different perspectives. This did wonders for the burn out issue, (which is a work in progress). Once I worked this out, I went back to the starter exercises to just focus on developing the correct technique for support. They are slower and a bit easier for me to do.

Using proper support also solved another issue I was having when doing the scales that I felt out of breath, but also I could hardly breathe in. Like I had relaxed my belly and tried to breathe in but as it was already sticking out from being relaxed, there was no room to breath in as it couldn’t go out any further. Then when I did the scale I didn’t use much air and as a result I was in this perpetual state of not being able to breathe in much, and it was like I had all this stale air and I had to stop after a while and just breathe out so I could take a few breaths and then continue….
When using support It is like I push down and this actually pulls my tummy in, although I am aiming down, and then when I relax it just pulls fresh air in as my tummy relaxes out. When using support I get the sensation of siphoning air out rather than pushing it out, and I can apply this to high notes as well. It is like you lift the soft palate giving you access to move up without constricting your throat and then use support to allow you to siphon the air out and now I have something sustainable.

I am working on building the muscle memory to make all this happen unconsciously. It is getting better but I have to concentrate on it, like when I was first learning to drive a manual :-).

Developing these new skills has enabled me to improve on pitch, (not perfect by a long shot, but way better than before :-), and actually start being able to articulate a melody. I have a few cover songs I have been working on and so I will post these in the demo area once I get set-up to do some recording.