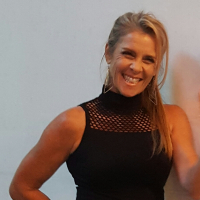 christinefoltz 2.0 PRO Posts: 2
June 2020 in INTRODUCE YOURSELF
Most of you newbies share you are late in the game, but I'm 56! I've been performing on stage since I was 14 with gymnastics, then dance through college as a Dance/Movement/Ex Science Major, touring in 7 states and teaching and choreographing, as well as competing; then professional speaking over the last 6 years. I've had 2 voice classes in college, but never developed my voice because my dancing is my strength. ( I auditioned for Disneyworld in Orlando twice in college, got to the finals both times but was blown away by the singers....I had the moves and the acting down!

A little over a year ago, I was in 2 accidents, and have 3 herniated bulging discs in my lumbar/sacral area and a torn meniscus. I turned to music as my therapy, and began playing the tambourine, and added other percussion instruments, and have been performing in a trio and duet for almost a year now. I'm also going to be a 1st-time Grandmother this weekend!!
My lead singer/lead guitarist has challenged me to pick up some interesting percussion patterns (I never thought I'd be a percussionist, either!), and now into singing some background vocals.

I always wanted to sing, esp. harmony, and those deep throaty rock/blues songs. (I'm not sure my range yet as I haven't pushed it yet) I just started the live-stream exercises with terms and Volume 1 into barely Volume 2 almost 1 week ago.

Is there a definite slow-steady pace to follow as a protocol always? I've scheduled in 1 hour/5-6x/week.

Oh, and I haven't shared with my lead guitarist/male vocalist I am doing this...I want to blow his ass over when I'm ready to surprise him.

Any hints, suggestions for slow steady progression, would greatly help.

I'll start to tape myself next week and post some scales, or whatever you suggest.